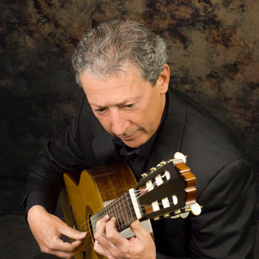 As a member of the Castellani Andriaccio Duo, Michael has enjoyed a celebrated career as a sought-after touring and recording artist. Having received numerous awards and distinctions including a scholarship to the Andres Segovia master classes at Santiago de Compostela and two Solo Recitalist Fellowships from the NEA, the Duo has toured internationally as recitalists and concerto soloists.  They have recorded nine cds, two named “Best of the Year” by Fanfare Magazine and American Record Guide. Critics around the world from the New York Times to Gramophone Magazine have unanimously praised their, “elegance, style, poise and exquisite taste…” .  His solo CD, Deve Ser Amor, met the same acclaim, “Armed with daunting classical technique and a flair for spontaneity, these performances are a fluidly lyrical delight. This cd may well become one of your favorites!” This season, Michael will be performing the world premier recording of “Goyescana”, an important new guitar concerto by three-time Grammy winner, Michael Colina.  The recording will take place at the legendary Abbey Road Studios in London with the London Symphony Orchestra, Ira Levin conducting.   Michael is currently Director of Artists and Repertoire for Fleur de Son Classics.