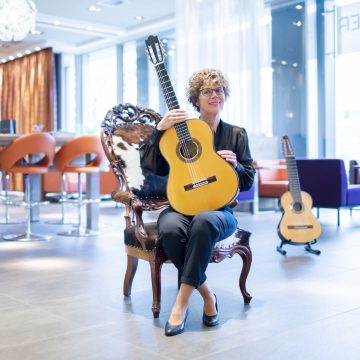 Saskia Spinder began studying classical guitar with Louis Gal and later continued with Jorge Oraison at the Conservatory of Enschede. She has followed masterclasses with Manuel Barrueco in Amsterdam and Toulouse, Hubert Käppel and later with Scott Tennant in Germany.

In 1985, she won the IJsbreker Guitar Competition in Amsterdam. Two years later she was a finalist in the prestigious “Concours de la Guitare” in Paris and made her TV and CD debut at the Holland Festival in Amsterdam’s Concertgebouw.

Saskia performed in 2000 the Concerto in A major by Mauro Giuliani with the Chamber Orchestra Osnabrück, Germany.

Since 2009 Saskia forms a duo with Sytse Buwalda

2011 Saskia performed with Ferdinand Binnendijk at the Festival Classique, The Hague, The Netherlands. May 2011 Together with counter tenor Sytse Buwalda and mandolinist Ferdinand Binnendijk forms the Asteria Ensemble. October 2012 and 2015 Saskia performed with the Asteria Ensmemble at the Festival Leo Brouwer de Música de Cámara, Havana -Cuba. October 2012 the first CD of the Asteria Ensemble was released, with world première recordings of dedicated works by Leo Brouwer (Canciones Amatorias) and Victor Kioulaphides (Hesse Lieder)