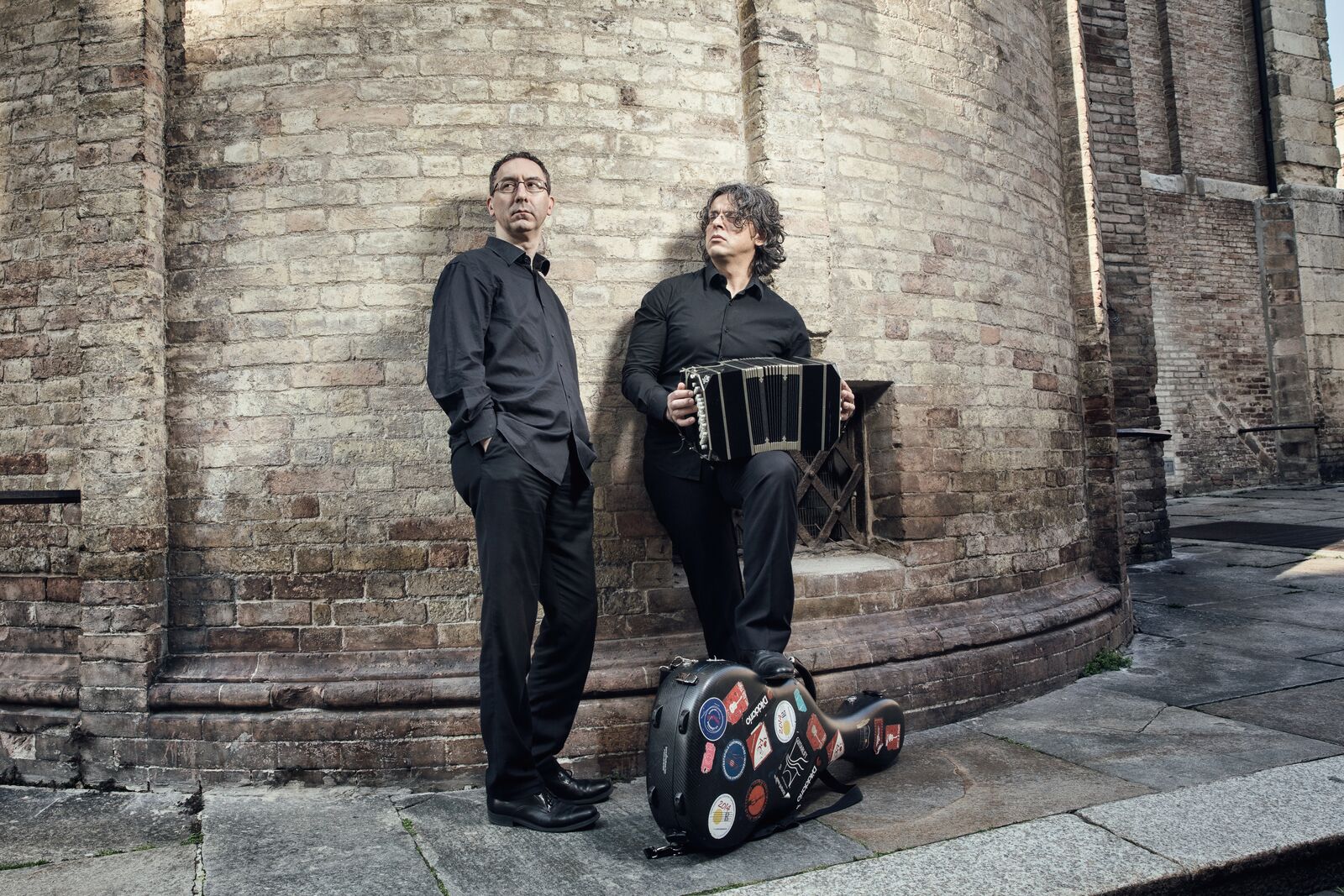 Giampaolo Bandini – Cesare Chiacchiaretta Duo, guitar and bandoneon, formed in 2002, pursuing the clear aim to propose Argentine music through the charm and magic of its most representative instruments. The duo immediately became an important point of reference in the international concert circuit thanks to their great communicativeness joined to an extraordinary charisma. Invited by the most important festivals and theatres in the world, they have toured in more than 50 countries, among which Argentina, Mexico, Korea, Romania, China, Poland, Ukraine, Austria, Slovakia, Moldova, Germany, Spain, India, Switzerland, France, Greece, Lithuania, Belgium, Holland, Croatia, Russia, Bosnia, Slovenia, Serbia, Turkey, the Czech Republic, Hungary, Cyprus, Luxembourg, USA and Canada, meeting outstanding critical and audience approval.
Celebrating the 15 Years of Activity of the duo, in 2017 was published “Escualo” (DECCA label), their discographical debut dedicated to Astor Piazzolla music.

The duo had the privilege to play Astor Piazzolla’s Double Concerto “Hommage a Liegi” conducted by Maestro Leo Brouwer at the Auditorium Paganini of Parma and for “Unione Musicale of Turin” with the renowned Moscow Virtuosi chamber orchestra conducted by Pavel Berman. They are usually invited to perform as soloists with orchestras such as the Baden-Baden Philharmonic Orchestra (Germany), Brno Soloists (Czech Republic), the Camerata Santiago de Querétaro and Silvestre Revueltas Orchestra (Mexico), the Round Top Chamber Orchestra and Brazos Valley Symphony (USA), the Asian-European Symphony Orchestra (Korea), the Philharmonic Orchestra of Kiew(Ukraine), and many others.

In 2004 Bandini-Chiacchiaretta Duo was awarded the 15th “Beniamino Joppolo” Città di Patti  Prize (in the province of Messina, Italy) for remarkable artistic achievements in the field of music. In 2005 the duo made their debut in the prestigious Grand Hall of Saint Petersburg Academic Philarmonic achieving such great success that they were immediately asked to play for the following years. Important composers wrote original compositions for Bandini-Chiacchiaretta Duo, among which the legendary cuban composer Leo Brouwer, who, in 2017, dedicated to them the “Folia a travers de Los siglos”, premiered at the Hong Kong festival. Other composers who have written music for this duo are Daniel Binelli, Fernando Tavolaro, Andrea Padova, Nicola Jappelli, Roberto Molinelli, Nejc Kuhar, Saverio Rapezzi and Maximo Diego Pujol, who dedicated to them the Double Concert for guitar, bandoneon and orchestra “Luminosa Buenos Aires” (2009), distributed all over the world for the Concerto label.

Their peculiarity of living music to the full and without boundaries leads them to work together with prominent artists such Elio (delle Storie Tese), Amanda Sandrelli, Nando Gazzolo, Dario Vergassola, Monica Guerritore, Enzo Iacchetti, Marco Baliani, Alessandro Haber and musicians such as Salvatore Accardo, Fernando Suarez Paz, Avi Avital, Michele Pertusi, Corrado Giuffredi, Danilo Rossi, Massimo Quarta, Enrico Bronzi, Franca Masu, Maria Estela Monti, Enrico Fagone and many others.They have recorded for the most important radio and television broadcasters in Italy and abroad. In 2013, during a long Russian tour, Bandini-Chiacchiaretta Duo made their debut with great success in the Tchaikovsky Hall in Moscow. In the same year they performed in an important concert for the Guitar Foundation of America (GFA) in South Carolina (the most famous guitar convention of the world). As teachers, they are requested by the most renowned Academies and international Universities and hold classes at the Higher Institutes for Music Studies “Luigi Boccherini” in Lucca and “Umberto Giordano” in Foggia, and for Portogruaro International Music Festival. Bandini and Chiacchiaretta are D’Addario endorsers.